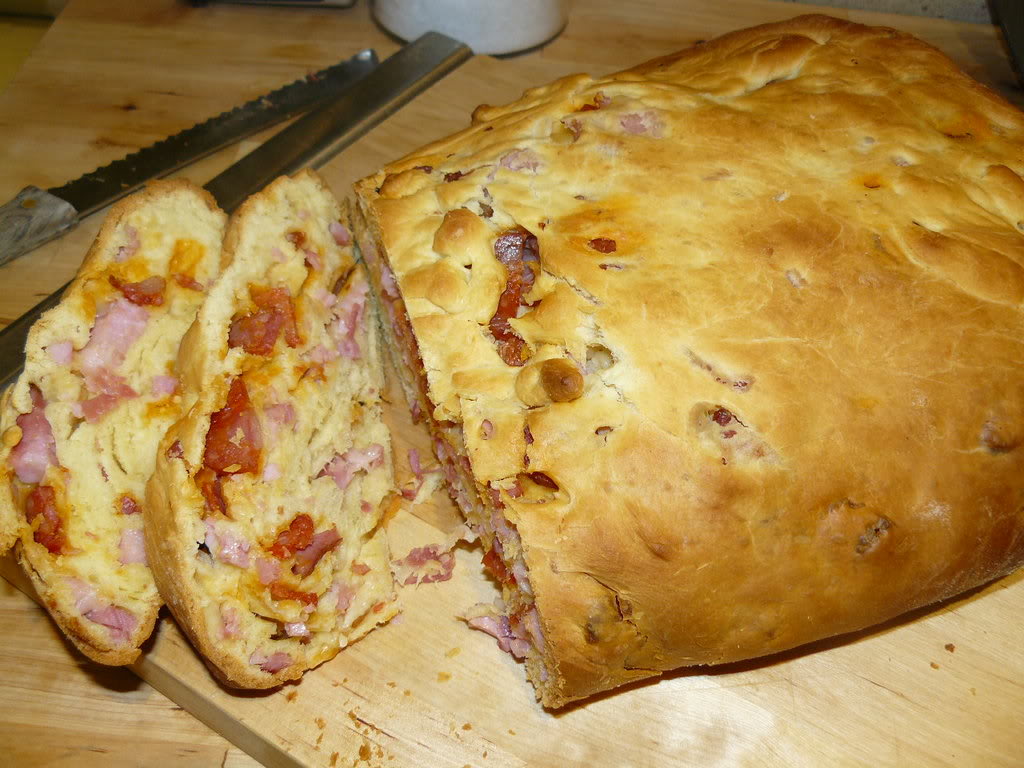 Folars are a traditional Portuguese bread typically served during the time of Easter. Folar de Chaves originates in the north-eastern Portuguese regions of Chaves. It is a savory egg rich meat bread which is stuffed with various signature Portuguese meats such as chouriço and presunto (ham), although there are many variations with different meat components. This bread is hearty, filling, and absolutely rich in flavor. Great for serving during Easter and other holidays with lots of hungry guests.

Directions:
1) In a bowl add the milk, sugar, salt, and yeast. Leave it for 15-20 minutes until it grows and starts bubbling.
2) Now mix the eggs into the yeast mixture.
3) In a mixing bowl add the mixture to the bowl and add the flour, butter, and olive oil.
4) Beat the mixture until it comes together and reaches a smooth and even consistency.
5) Place the dough in a bowl covered and let it rise for about 1 and a half hours.
6) Once done, transfer the dough onto a floured surface and roll out to 7 inches wide and 2 inches thick.
7) Lay the chouriço first on top of the dough and then add the ham and bacon.
8) Now roll the dough into a loaf with each layer having some of the meat. Press down on the dough as you roll it to prevent any bubbles or spaces in between the layers. Now add the dough to a loaf pan. Spread the pan with olive oil to make sure it does not stick.
9) Allow the dough to rest for about 30 minutes while covered until it risen a bit more.
10) Brush the top of the dough with an egg.
11) Then bake in a preheated oven at 390 degrees Fahrenheit for about 40 minutes to an hour until the the crust has become golden brown.
12) Once done, remove from the oven and let it sit for 15 minutes to cool off and then serve.